Simply the best dog ever

Ok, so he still wants to eat the new puppy, but otherwise he is the best dog ever.

So, I taught Henry at a very young age that nothing is his unless it is given to him. So, he doesn't chew things that aren't doggy toys, and doesn't steal food. I can put a plate of food on the coffee table, mere inches from his face as he sits on the couch, and he will not touch it. Cammi is an entirely different story, having eaten an entire hot pizza (stolen off the stove), a boiling hot bowl of soup, and many many other not-for-doggy foodstuffs. She once choked down a lemon wedge that had fallen on the floor, just so our other dog couldn't have it. I don't write about Cammi much, because I really dislike her. She's LJ's girl though, so I've got to tolerate her.

Anyhoo, back to my golden child, Henry. Last night we were having a pizza dinner in the living room while watching tv. I had left my plate on the coffee table (Henry on the adjacent couch) and gone into the kitchen to grab a drink. As I came back in he room, LJ tossed Henry the crust from his pizza, which bounced off Henry's big rubber nose and landed on my plate next to two big fragrant slices of pizza. The look on Henry's face was priceless... Sort of like that Reading Rainbow episode where Levar Burton drops his ice cream on his shoe. Heartbroken. He looked at me, at the plate, at me, at the plate, and flumped down on the couch with a huff and a sigh. "Henry, do you want that 'cookie'?" ...Ears perk up... "That looks like an awfully tasty cookie." ...glances at the plate and then stares at me... And then the key word, "OK". Henry reached his muzzle out to the plate and gingerly snagged ONLY the little piece of dry crust that LJ had tossed him, completely avoiding my pizza. Best. Dog. Ever. He got a piece of pepperoni as a reward. :) 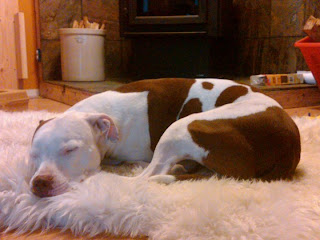 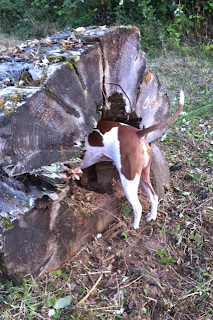 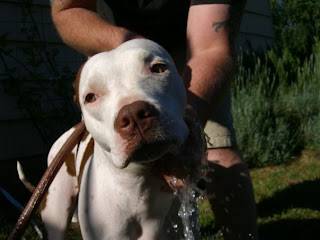 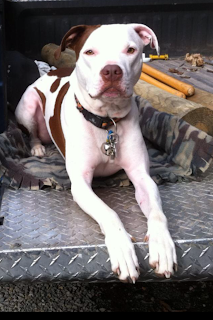 And yet also a total couch potato. :) 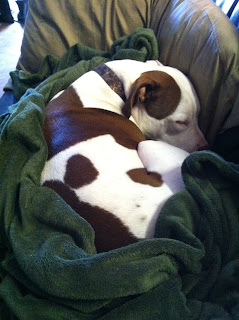 Email ThisBlogThis!Share to TwitterShare to FacebookShare to Pinterest
Labels: Henry

As for Cammi, sounds like LJ has work to do...

Have a wonderful evening! ♥

What cute pictures! Love the talented, and curious ones the best. ....my dog would have eaten the other two pieces of pizza too :-(

Henry DOES sound like the best dog ever. I'm going to share your blog with my dog-loving family and friends who will appreciate just how amazing that pizza story is.

Those pictures are beautiful. I think they capture the capacity of that dog for greatness.

I had two pugs (now just one) and they were similar in temperment - one was the untrainable scallywag and the other was the "good dog". Now the scallywag is gone and the "good" one is so spoiled she's starting to slip in her greatness!

Aw little monkey :) He's adorable! How are you dealing with him wanting to eat the puppy?

Rae --- He is GORGEOUS! We get that way around the house. Everyone tells me I spoil Howdy. Well, no duh. I am 43. I can do what I want to do and he is an awesome dog, so it makes the spoiling part super easy.

Henry is very photogenic. His coat of hair is awesome. I'd be proud too.

Sometimes you just have to let the world know how much you LOVE your dog !!!!!
And..for good reason. B.

Excuse me, but that couch potato looks like some tucked him in! And I know who it was!

I love Henry too; he is one great dog.

Henry rocks, and you did do him a favor by training him right, to have good pack manners, no one likes a food stealing pain in the ass dog. No matter how cute they are. Henry is gorgeous, and should be a poster dog for his breed,for both looks and smarts. I think he deserves two pieces of pepperoni for that display of self control!:)Where did you find him?

Linda, yeah, Cammi needs more than a little work. She's a little mental, though, so we just don't bother anymore.

dr momi, thanks! I have waaaay too may pics of this dog. :)

kp- thanks for the link back. You rock!

Lindsey- I had a pug years ago. They sure are fun dogs. Mine loved to shred paper bags. :)

Kristy- They get to associate through the fence, and we do sessions in the yard with Henry muzzled, just in case. We're still not entirely sure if he wants to eat he puppy, or just play rough. We're waiting for the pup to get a bit bigger before we let them have much contact. Puppy is only 18 lbs right now.

Lana- thanks! I'm pretty proud of my handsome boy and his "cowhide" coat. :) And Howdy deserves to be spoiled!

Heidianne- we got him off Craigslist when he was about 7 wks old. The lady we got him from found him, his mom, and sister abandoned on the side of the road.

All- I'm gonna try and tell more about my Henry pup in a future post. For the moment, have a fan-freaking-tastic Thanksgiving!!!