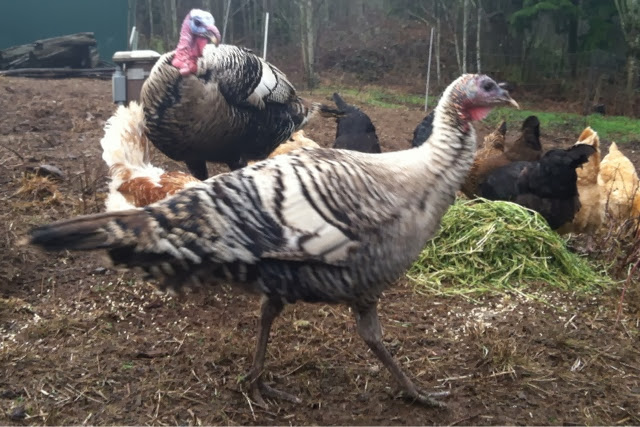 Just had to post, as this is my only real record of when things happen.  Saw Abby in the A-frame hut for the first time yesterday.  Today, I discovered her first egg!  Now, if I can just witness Beefy getting his business underway, and the weather warms up so eggs don't freeze, I'll let her start building a clutch.  Gotta remember to email the gal I got her from and share the good news.  Apparently Abby hatched a batch last year, so we'll see how it goes.  If nothing is fertile this year, we may need to add another gander to the flock... and what that means for Beefy?  I dunno.  Anyhoo, goose eggs leave me feeling that spring weather and longer days aren't far off.  :) 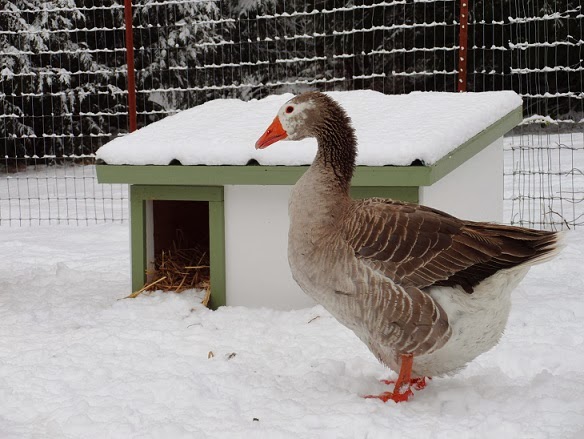 Updates/changes on the farm! New birds, fluffy goat and sheep...

A few changes over the last 6 months or so.

We have increased our muscovy flock.  Merle now has two more girls in addition to Maggie and Frieda.  They're young, and I expect they'll hit 1 year in late summer.  Man, can these ducks fly.  We had to clip wings, as they enjoyed flying all around the backyard and over in the chicken yard. 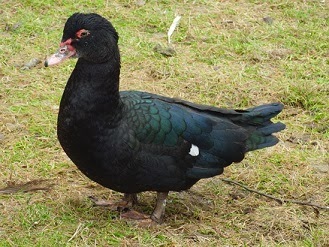 Of the scovys hatched last year, we butchered all but one drake.  We also butchered our goose Broccoli, Beefy's girl/boy friend.  Pretty sure Broccoli was a boy, and low boy on the totem pole to Beefy.  Beefy was entirely uninterested in Broccoli, and would mount the ducks instead.  We never saw Broccoli mount the ducks, but I'm guessing because Beefy was so dominant.  Anyhow, the crazy thing was that the two <1yr old scovy drakes that we butchered dressed out at nearly the exact same weight as that goose!  Nuts!

We ended up getting a pilgrim female for Beefy, and named her Abigail. Great thing about a pilgrim is that we KNOW it's a girl, due to the sex-linked color.  Yay!  Crusty is in LUUUURVE with Abigail (Crusty has a goose fetish, having grown up with geese) and likes to follow Abigail around while doing her sexy duck dance.  It's highly amusing, but Abby doesn't care much for it.  Added plus, the gal I got Abby from has pied guineas.  She's supposed to give me a call this summer when she has keets, and we'll be able to get Deputy Guinea some friends.  Ah, I can already hear the guinea chorus.  Sigh. 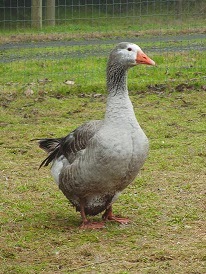 We kept one chocolate drake from last year's hatches, Choco Taco, and got him two girls as well.  Only one of the 4 total new girls has a name.  Chad named her Hennifer Grey.  :)  She's a pretty gray/brown, and a really calm and petite little girl. 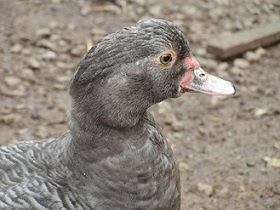 Choco, the muscovy drake we kept, is a big beautiful boy.  He was attacked by our trio of turkey toms a few months ago and they just about scalped and blinded him.  Time in a crate and treatment with bluekote, and he's growing his feathers back on his head, and still has both eyes, though his beak is a little gnarly on top.  He was really a mess for a while, but is back out there terrorizing the roosters and lovin his girlfriends.  We also only have ONE tom left... his brothers were very tasty (seasoned with "these damn turkeys attacked my Choco"). 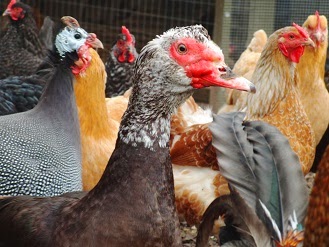 What else, what else... Traeger and Weber, boer goat and katahdin sheep, are fat and sassy and slated for slaughter on the 19th.  We'll kill/gut/skin here at the house, and then take the carcasses to the butcher for further processing.  Very ready for them to go, as it's almost time for pigs!  We're debating taking the hides down to a guy in Clackamas to be processed, as they're really nice and fluffy from the unusually cold weather we've experienced over the last few months.  We could try to do it at home, but their coats are so nice... I think we'll practice on the next deer we get, and just have these professionally done. 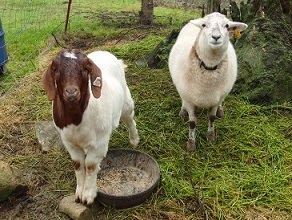 Fat, Sassy, and headed for the freezer.


So, that's about it for the moment.  Not too much else exciting.

Despite the cold weather (<20deg this morning), the ducks have started laying again. Front pen contains Beefy and his new girl Abigail (Broccoli is in the freezer), Merle, Maggie, Frieda, Crusty, Olga, and two new scovy girls (Sven is also in the freezer). We're only getting 1-2 eggs a day, but the girls are making pretty little round nests in all the huts. They didn't like the new hut last night, (the geese swore at it for hours and the scovys wagged their tails and bobbed their heads), but today the straw on each side was swept into pretty little nests. Hoping the low dark doors and nests being in the back of the hut will help dissuade the ravens from sneaking in to steal eggs. Stupid ravens.

Beefy is not impressed. 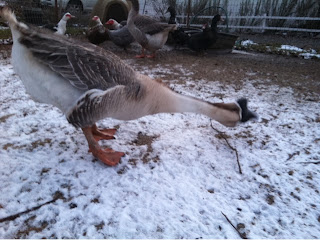 But I'm pretty happy with my work. :) 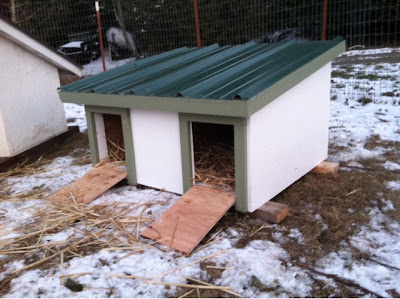 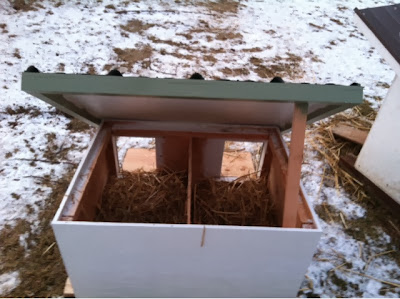 Didn't realize quite how long it's been since I've been on here. Blogger got pretty non-smartphone friendly, and it just wasn't convenient to post anymore. Add to that a new boss, busy at work, busy at home etc, and blogging fell by the wayside. Gonna try to get online on an actual computer at least once a week this year. Looking forward to catching up on everyone's blogs, and posting some updates on our critters and happenings. Hope everyone is enjoying a great start to the new year! 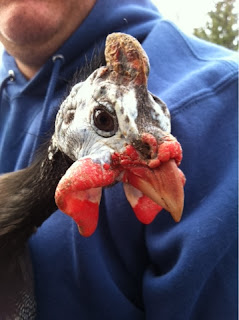 Deputy Guinea says hello and hopes to have some pied guinea companions in a few months!
Posted by Rae at 7:47 PM 3 comments:

Email ThisBlogThis!Share to TwitterShare to FacebookShare to Pinterest
Labels: Guinea

As the weather turns colder, I'll slowly get back into blogging. For now, we added four new young muscovy hens to the farm this afternoon. The two larger girls went out with Merle, Maggie, Frieda, Olga/Sven, Crusty, and the geese. The two younger are going in the chicken yard with the chickens, turkeys, Choco Taco (Chocolate 'scovy drake hatched here this spring), and 4 scovys from a later hatch. I sure do like these ducks! 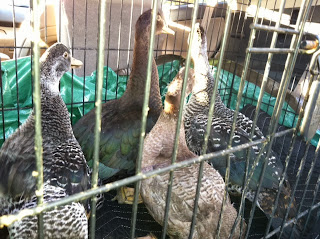 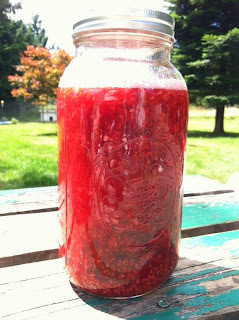 Maybe, if I'm lucky. Had extra raspberries from a flat we purchased down the road at one of the local berry farms. 4c of berries and 5c of white wine vinegar per my Ball preserving book. Recipe says to stir every couple days, and taste once a week til desired strength is achieved. We'll see how it goes. Only cost me about $8 in vinegar, so no great loss if it doesn't work, right? Right.